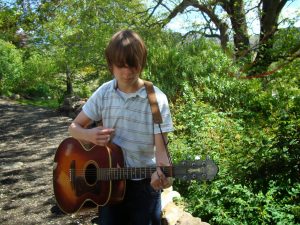 Small children may be a handful but at least you know where they are. Even when they’re toddling, you can move faster than they can. As they want to be with you pretty much all of the time, you’re never hit with that wave of horror (‘Oh my God, where is he?’ Answer: on you).

Then… everything changes and there comes a point at which they don’t want us around at all. They want to go out without us while we stay at home, doing our tedious grown-up stuff. My sons were nine when this happened: a bit young to be playing out alone, you might think, but we live in a sleepy country town with few obvious hazards. Apart from one falling-off-a-bike incident (broken arm) and being whacked in the face with a hockey stick (smashed tooth), all the numerous dashes to A&E have been caused by incidents at home.

Yet we’re still scared of the great outdoors when our kids are small. It doesn’t make any sense. If you consider the hazards in your average home – oven, iron, fireplace, booze, all of which can be horribly dangerous if handled without due care – then playing in the park is as close to a haven of safety as you can possibly get.

In my childhood West Yorkshire village I played out with no parent hovering nearby from the age of four. Friends and I would force entry into a derelict textile mill and charge about on the rotting wooden floors. There was a metal trough – it can’t have been more than a foot wide – which spanned a gorge and was ideal for running across. We swam in a dam and cycled for miles and nothing terrible happened. Okay, a man flashed at me once (old-style, with raincoat, from a hillside). ‘I saw the front of a man!’ I yelled, pelting into my house. Mum just gave me a curious look and carried on stirring the pot on the stove.  I think she suspected I was making it up.

When the teenage years hit, I wanted to be as far away from my parents as humanly possible. My own kids are the same. ‘They’re allergic to us,’ a friend complained, when we were discussing our kids’ unwillingness to come along on family days out – and of course it’s hurtful at first. Normal, though. And let’s be realistic: yes, it would be quite sweet to go Edinburgh Zoo with my almost eighteen-year old twin sons. But I’d be unable to shake off the suspicion that they were regarding the trip as ironic, in a sort of, ‘Can’t wait to Tweet about this – my day at the zoo with Mum and Dad! Haha!’ kind of way. And they’d force us to stand there smiling in front of some baboons and take our picture and all their friends would laugh at it.

Even if that didn’t happen, I’d suspect they’d only come along to humour us. I don’t want to be patronised at the zoo, thank you very much. I get plenty of that at home: ‘Mum’s come to the point where she’d quite like an iPod. She’s saying how handy it would be to have all her music on a little portable device. She’s like someone in the first ever iPod focus group! HAHA.’

Anyway the baboon scenario is hypothetical because the only way I’ll persuade any children of mine to come to the zoo with me is if I adopt some younger ones. And since my offspring nearly peed themselves at my ‘massive’ forehead – they’d never seen my fringe pulled back before – I’ve decided I’ve had quite enough cheek off kids. So off they go, every weekend – to Glasgow and Edinburgh, our nearest cities, both an hour’s journey away. This started when they were 15. I fretted madly at first: was this too young to be in a big, scary city with a bunch of similarly giddy adolescents? Then I asked myself: what was I scared of exactly? What could possibly happen to them in Top Man?

As the years crept on, my sons started going on ‘camp-outs’, a favoured teenage activity in these rural parts. The idea is, a bunch of friends head off into the wilds for the night with food, guitars, a tent and sleeping bags and return, looking like corpses that have been dragged through dung, at around 9.30 am next day. I’m not foolish enough to believe that they lounge around practising the knot-work skills they learnt at Scouts. And of course I was iffy about it at first. But at 16 they needed their space.

Last year, at 17, my boys announced that they were going on a week’s holiday to Paris together. I felt no more than a small tingle of nerves as they set off for their flight. Next it was our turn. My husband Jimmy and I went to the South of France for a week, leaving our boys home alone (our youngest child had been taken on holiday by a friend’s family). We were aware that two teenagers together are possibly capable of getting up to more hi-jinx than a singleton left alone. But then, a singleton wouldn’t be alone for long: word would get out and friends would converge and it wouldn’t be your house any more, it would be the Chelsea Hotel.

On our return, our sons vowed that they hadn’t had a party. But there was a ragged crack in the bathroom door and I kept finding the odd New Look stiletto lying about. It was only a ‘gathering’, I was told. Worrying. But not half as scary as that first time they went to the park.