Someone else’s kids being noisy? Try a little tolerance…

‘Your kids are out of control,’ the man barked. ‘It’s a disgrace!’

I’d taken my twin sons to an aquarium. A star attraction was the moving pavement, which took you along a tunnel through a giant tank of sharks. Actually, no – the real star attraction was the big red button that stopped the pavement moving. Of course my sons pressed it. What else would they do? They were seven years old. The button was irresistible.

An angry man marched towards us and threatened to report us to the staff. My cheeks burned and I sensed tears welling up behind my eyes. Naturally, angry man’s children were behaving beautifully, filling in the worksheets he’d probably printed out for them – they didn’t seem to have even noticed the big button.

It’s normal for kids to get up to hi-jinx in public places – and, fortunately, most people are understanding. However, we all encounter the odd individual – a member of the ‘your kids are out of control!’ brigade – who seem to believe that a child’s every move can be controlled by a parent, as if they were mini robots instead of unpredictable human beings.

How often have you heard a disapproving adult muttering, ‘Well, I blame the parents?’ Give us a break, people! We are trying our best, usually on a pitiful amount of sleep.

It’s amazing how intolerant strangers can be when they witness a child being mischievous. Recently, I was asked to take part in a radio talk show, on which the subject was a certain cafe in Essex, whose owner had decided to ban children – ‘so they can’t spoil the experience for everyone else.’ 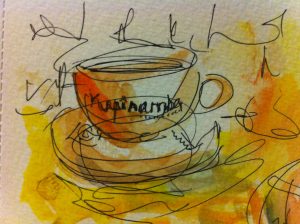 How terribly life-sapping, I thought, to be denied the chance to just sit and have a coffee that you hadn’t made yourself – and which, crucially, hadn’t been re-heated in the microwave five times. Some callers agreed that the no-kids ruling was rather ungenerous, and I remembered how grateful I’d be whenever I found a welcoming coffee shop, where I could sit with my young children and enjoy a hot drink and a slice of cake. Simple pleasures indeed!

However, according to the vast majority of listeners who phoned into that show, that cafe owner was quite right. ‘I don’t want to be surrounded by screaming kids!’ thundered one man. Perhaps he was the same man who barked at me for ‘letting’ my sons press the red button? As a home-based writer, I regularly take my laptop to cafes to get out of the house. In the twenty-one years I have been freelance, I have never once had my ‘experience’ ruined by rowdy children.

Oh, I know kids can be noisy and sometimes you just want a proper adult night out – but we were talking about a cafe, not a Michelin-starred restaurant. ‘The trouble is,’ the man wittered on, ‘kids are allowed to run amok these days. Mine never did that.’

Yes they did, Mister Perfect. You’ve just blotted it out.