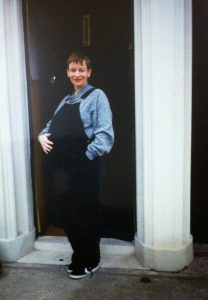 I was raking through some old photos for a magazine feature and came across this pic of me, very pregnant with Sam and Dex, in front of our last London home in Cyprus Street, Bethnal Green. I was so excited to be having twins. It’ll be a doddle, I thought: two babies, one pregnancy. Bargain! I also thought I’d be back in my beloved office within a matter of days, having hired a nice nanny to take care of the practical aspects. Me, I’d enjoy the fun stuff – tickling, cuddling, baking cookies and reading beautiful picture books.

Here’s what I wish I’d known then.

All the stuff you used to enjoy – films, books, drawing, playing an instrument – go out of the window for a while.

I mean a long while – years, in fact. When they finally start creeping back into your life, you worry that you’ve forgotten what to do with them. For ages, I couldn’t concentrate on any film more challenging than The Breakfast Club, Pretty In Pink or St Elmo’s Fire. It was like being a teenager again – but with stretch marks and a fridge crammed with formula milk. But gradually things returned to normal – ie, occasionally I’d watch a film that didn’t star Molly Ringwald, sometimes even with subtitles.

You will wear those dungarees to death.

I scoffed when my husband Jimmy insisted on buying them for me in an army and navy store in Paris. But they are the very best thing for a pregnant lady and became virtually welded to my rapidly expanding body.

You think you’ll work right up until the day before they are born, but you won’t.

My consultant wouldn’t let me. So from six months onwards I lay around the house, spooning Ambrosia Creamed Rice straight to my mouth from the tin. I wish I’d known then to enjoy feeling faintly bored, as that was the last chance I had to be idle until eight years later, when our third child started school. Oh, and I never returned to my old job. I haven’t had a regular salary since 1997 and hear that the workplace has changed a lot since then – for instance, you’re not allowed booze in the office! How on earth do people get through the working day?

Child-free friends will tell you about their glamorous nights out, or that they’ve just been to a spa and had their breasts exfoliated.

You are allow to feel bitter – and even cry – over this. It does not make you a bad person.

Your nanny plans will be swiftly forgotten.

You’ll become a control freak who’d rather do it – even the messy, mundane stuff – yourself.

People will assume your twins were IVF (when they’re not) and will challenge you on this delicate matter in the park.

‘They must be!’ one woman insisted, before adding, ‘but I suppose you did have quite a high chance of having them… as an older mother.’ People will say the most irksome things, and after a while they just wash over you (or make you laugh hysterically as you scamper home). You’ll become remarkably tolerant because all that matters is getting your children out in the fresh air, then safely ferried home again whilst avoiding dog poo.

Going to the hairdressers becomes such a hassle that you’ll start having someone come round your house.

She will chop at your hair in your bedroom while your babies crawl around, trying to eat it off the floor. It’s not relaxing, and no one brings you a nice coffee or a glossy magazine – but at least your fringe is out of your eyes.

People will tell you what you’re doing wrong all the time.

Ignore them. They know nothing. At least you know a bit.

The toddler groups you thought would be hell are filled with like-minded women you’ll rely on for your sanity.

Sure, the coffee is bad, as are the pink wafer biscuits – but you now anticipate these get-togethers more eagerly than Christmas.

You will glance wistfully at pretty lingerie in department stores, before moving swiftly on.

You’ll be in massive sensible knickers for quite a long time – possibly forever – and you will love them.

That massive bump will go away, but not in a week.

It doesn’t matter. No one cared about celeb mothers shedding the baby weight within minutes, because the whole celebrity obsession hadn’t really taken off back then. There was no sidebar of shame – there was the Internet, but no one knew what it was – and no one expected a raddled new mother to look radiant. You were allowed to be knackered with your hair sticking up. And you were allowed to wear your beloved dungarees well past childbirth, because they made look earthy as if you knew what motherhood was all about.

And you soon become very adept at pretending you know what it’s all about.