Our first kid-free holiday in 18 years… what will we do? 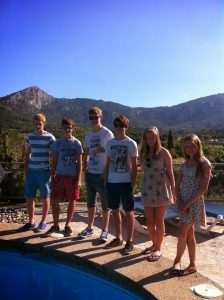 Family holidays were easy when the kids were little. Well, not easy exactly. By the time I’d finished packing I’d be utterly exhausted (although Jimmy could never understand why I made such a big deal out of preparing for a trip. ‘You should be like me,’ he gloated. ‘A couple of T-shirts and a pair of shorts and you’re done.’).

I would have laughed – bitterly – had I not been busy packing a million items of kids’ clothing, toys, board games, DVDs and inflatable tortoises, plus all the medical stuff for every possible emergency, which apparently we didn’t need – because just a couple of T-shirt and a pair of shorts and you’re done.

Anyway, once we were away on some gorgeous beach, all my stresses would melt away. The kids were happy to run in and out of water all day. But it’s been a long time since anyone collected razor shells or dabbled about in rock pools. The pic above was last summer, when we rented a house near Pollensa in Majorca and took our three teens, plus three of their friends – it was brilliant. The kids totally took over the barbecue and we barely did a thing (apart from Jimmy, who drove the terrifying 9-seater car around mountain roads). But this year, everyone is doing their own thing, or being taken away by friends’ families. So Jimmy and I are going away on our own.

Just the two of us! We haven’t done this for eighteen years. I’m sort of bereft and delighted. Last kid-free holiday we still used travellers’ cheques and took about five minutes to pack (camera, Birkenstocks, pants). We didn’t have mobile phones or any other twittering gadgets. So it all feels quite different this time. It took about six months to decide what to do, the choice was so boggling. And now I wonder what we’ll talk about for a whole week. Also, we’re so excited I worry we’ll over-schedule ourselves and either do too much or too little. And it’ll be odd, lying on a beach with no one kicking sand all over the food or trying to bury us. And how will we amuse ourselves without running off for ice cream and snacks?

Still, it’ll be interesting to wander around crumbly old towns without being annoyed because the kids aren’t enjoying it enough. We won’t be shouting, ‘Look at that church. Why aren’t you appreciating it? We might as well be at home!’

There’ll be no one moaning if we suggesting going to see some Boring Art, or demanding lobster off the menu when we stop for a quick lunch. ‘No, you can’t have the lobster, I hate to be mean – but it is £800.’ The holiday house cleaner won’t drive after us in a furious rage to the airport, due to a grubby handprint on a bedroom wall – as happened to us in Corsica. We won’t be fined for shoving a glass down the inner workings of the pool (‘I was trying to trap ants!’) – as happened in Sicily. No one will perch on a radiator and accidentally pull it off the wall (Brittany) or puke in the hire car (everywhere). We will not have to park a big suitcase in front of the dent in the hire car when we return it, which happened because everyone was shouting in the back and Jimmy reversed into a pillar.

Also, no one will look disgusted at the sight of us in our bathing wear. At least, no one who knows us. I can’t bloody wait.