Dusting down the trainers… 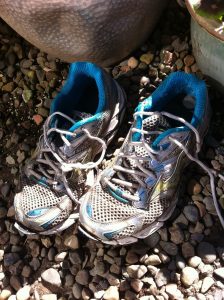 I’ve just started running again. I did my first 10k about eight years ago, but since then it’s been an on-off affair. Each time I think, I really should start running again, I’m filled with dread about the pain and torment I’m about to put myself through.

And of course, it’s never like that. Every time, I forget that going back to running isn’t like starting from the very beginning, when you stagger along, gasping and purple, worrying that you’ll fall over or puke. Starting again is painful – for ten minutes max. That’s all it takes to overcome the initial ‘Why the hell am I doing this?’ bit and be back on your way.

In fact, going back to running has loads to recommend it. For one thing, you’re always way better than you think you’ll be. Also, you remember, pretty quickly, why you put yourself through it. It’s liberating and exhilarating – it’s probably the closest a human being gets to feeling like a dog. All those knotty problems start to unravel. A bad mood miraculously fades away. The only thing that makes PMT bearable is pulling on my manky old trainers and getting the hell out of the house.

I read recently that writer Caitlin Moran swapped running for swimming when her joints started to feel creaky. Mine did too, so I now run on an abandoned railway track that’s conveniently grassy and soft. I try not to run on consecutive days and am building up slowly – 40 minutes is about my limit at the moment. But then, I’ve only been at it a couple of weeks. My friend Tania and I fell into a habit of meeting at 7.30 am in the Easter holidays and running with our dogs. I prefer running with a friend, and chatting all the way – listening to music doesn’t do it for me. I’ve never liked earphones plugged into my lugs and I’m always worried about some approaching hazard (escaped bull, angry golfer) that I’ll be unaware of with music blaring.

It’s so much more pleasurable that the many gyms I’ve belonged to over the years, cringing at the sight of an unused membership card stuck in my wallet. My thinking was: if I set up a direct debit, then I’ll go. Then: if I spend £150 on fancy gym wear and book a session with the gym’s personal trainer, then I’ll go. I just ended up mired in guilt and a lot poorer. Mainly, I just used the cafes.

In contrast, running is fantastically simple. Yes, it’s deeply unphotogenic when you start, clattering along and swerving dog poo with the straps of your unsuitable bra dangling down at your elbows. It feels weird, too, running for ‘fun’ when you’ve previously only done it only out of necessity – legging it to school with kids in tow, or racing across an airport concourse with a LATE PASSENGER label stuck to your luggage.  But pretty soon, it changes from being an ordeal into something you want to do, just because it makes you feel good.

If you need a kick start, grab a copy of Alexandra Heminsley’s funny and brilliant book, Running Like  Girl (Windmill Books) which details her transformation from couch potato to marathon runner. In fact, it inspired me to dig out my hideous old trainers again. Hope it does the same for you too.