The almighty trauma of the school photo

Facebook’s been full of school photos this week. Parents whose children have just left primary school have been posting pics of their children – sweet pictures showing big smiles. It struck me that, during the primary years, those regulation school photos (mottled grey/blue background, hair neatly combed) are fine, usually. It’s in secondary school that the whole business becomes something else entirely.

Take this: Exhibit A. It’s my husband Jimmy, aged about five, with neat side parting and finger waves (his dad was a barber). It’s a lovely picture, I think. I like it so much, I persuaded him to use it on our wedding invitation. 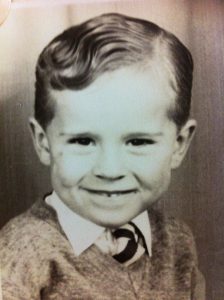 Then there’s this: Exhibit B. That’s me at about seven, girlie swot in the school library in a polo neck sweater. I wasn’t embarrassed that Mum had sewn braid around the neck. In fact, I’d probably asked her to do it. 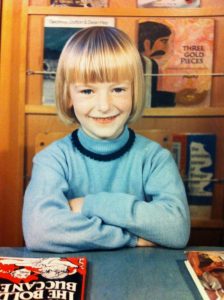 Then we come to Exhibit C when I’m about 13. I’m no longer happily parked behind a table of books. I am a seething mass of hormones and mortification. There’s so much wrong with this picture I don’t know where to start. 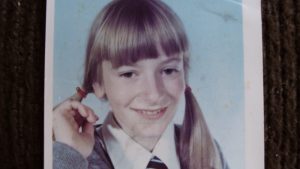 By that point I had decided that my nose was so large, I had better do something to detract attention from it – hence the two low pigtails, which I hoped would make it look smaller. I’m not quite sure how that was supposed to work, but it was a trick I believe I’d read in Jackie magazine (big pigtails = smaller nose, in comparison!). I’m also caught in a half-blink, and my fringe was obviously cut by my mum, possibly during a power cut using those round-ended scissors that small children use to cut paper.

As a final touch, in the actual photo, inky blots are visible on the hand I’ve raised, as if waving feebly at the photographer.

We keep reading how under stress teenagers are these days, with social media and the relentless pressure to be as skinny as Cara Delevigne. Okay, I didn’t have that to contend with. This picture was taken around 1978. Cara had yet to be born. And I never aspired to look like one of the models in my favourite magazine. But at least today’s teens are allowed to go to proper hairdressers and would surely remember to wash their hands before having a photo taken.

Come to think of it, it’s been years since I have been offered a school photo ‘for approval’ from my kids’ school. Either the school has stopped doing them or my offspring have decided to not bring them home. Perhaps I’m a bad parent because I never think to ask. Back in the day, though, my own mum would ask, ‘Have your school photos arrived yet?’ and she’d snatch them from me, all excited.

I remember her looking at this one in particular. ‘Oh,’ was all she said.