A trip down memory canal 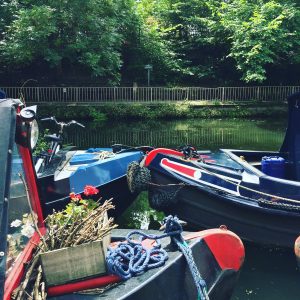 I was in London last week and had a few hours to spare on a sunny afternoon before catching my train back to Glasgow. So I thought I’d take a stroll along the Regent’s Canal in Islington, where I lived on a pea-green narrowboat called Parsley.

I hadn’t been back to this stretch of canal since my then-partner and I sold our boat, although I’ve had an inkling to visit for a long time. In our early twenties, we bought the boat on whim from an advert in a narrowboat magazine, and brought it down from Rickmansworth with no idea of how to handle the thing, or where we might ‘tie up’ (I don’t think we even used the term ‘moor’). By some happy accident, having negotiated the gloomy King’s Cross tunnel, the world opened up and we found ourselves on the pretty stretch of water which runs alongside Noel Road (where, incidentally Joe Orton was murdered with several hammer blows to the head by Kenneth Halliwell). However all was peaceful that day, and we found a space which seemed to be waiting for us, and so began two years of communal living.

I’d never have imagined that that kind of lifestyle, with everyone knowing each other’s business, would suit me – but I made friends who I’m still in touch with now, thirty years on. Mostly in our twenties, we quickly became a gang of a dozen or so boaters – known, disparagingly, as ‘water gypsies’ by the well-heeled Noel Roaders – who lived and socialised, partied, fell out, made up and ran to each other’s aid in emergencies. We became exceptionally close. It was almost like living in one enormous, bobbing house. 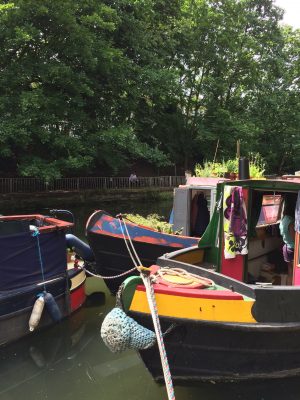 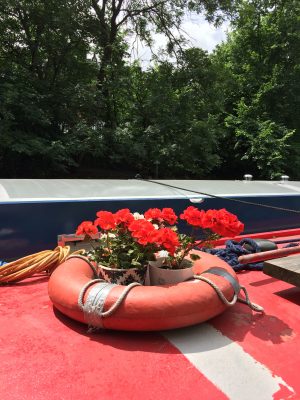 We must have reeked of woodsmoke and spent long summer’s afternoons lolling on other’s decks, drinking beer and chatting. For the price a shabby car, I had a home in a beautiful part of London with friends living mere feet away.

I’m not sure anyone could live that way now. In fact, it would be impossible in any part of London, let alone the leafy enclave of N1. As we were merely squatting the bank, we didn’t pay mooring fees, yet no one moved us on (we wanted to set up an official mooring as a sort of collective but our nemesis, the BWB – the British Waterways Board – weren’t having it). If anyone wanted to take their boat on a trip, the others would move theirs along the bank to absorb the space until their return.

Although there are fancy new flats past the lock, barely anything had changed as I strolled along my old stretch of towpath last week. There was still a motley collection of narrowboats (it’s now an official mooring) including one turned into a cafe, selling carrot cake. Yes, it’s posher, but the friendly atmosphere still prevailed. A young American woman, who’d been taking pictures of the boats, screamed as her Nikon camera fell into the murky water. She plunged in to try to rescue it, and moments later one of boaters ran to her rescue with an extra-strong magnet on a rope.

I walked in dappled sunshine, chatting to boaters, my head filled with all the adventures and larks we had, when buying a rusting old boat to live on from a small ad seemed like a perfectly sensible thing to do.

One response to “A trip down memory canal”