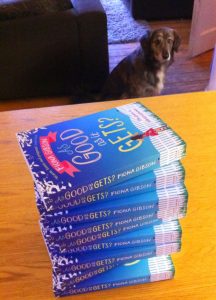 My new novel, As Good as It Gets?, is out in paperback today. Publication Day is a funny old thing: not quite what I’d anticipated when my first novel was published in 2003. I suppose I’d expected something rather like Christmas – ie, a whole load of fuss and excitement and booze. It was exciting – I remember an enormous bouquet arriving from my publisher, and waking up thinking, ‘My book is OUT!!’ – but not quite in the way I’d expected.

I took a trip to Glasgow to prowl around the bookstores. There was my novel, sitting on a shelf in a shop in between books by proper writers. I loitered about, all hot-faced and anxious, wanting to murmur to shoppers, ‘Er, what about that one? I’ve heard it’s actually quite good?’

At least there was no more worrying about whether I could have done better, or mulling over the many mistakes I’d probably made. It was out in the world now, which meant it was too late to change anything. It was a little like packing up your kid’s possessions in a big cardboard box and seeing him off to university. Christ, you think, driving away from his student halls, I’m still not sure he can fry an egg without setting his hair on fire. And will he remember to apply his athlete’s foot ointment? Well, that’s his look-out. You’ve done your work. You’re out of the picture now. You can have another baby! JOKE…

In fact, what I really love about Publication Day is the way it boosts me to get on with making the next one. It’s due to my editor by June, and will be out early next year. It’s a rolling process, which I happen to love: it feels fast-moving and exciting and you can’t be too precious about anything. I used to sweat for three days over a single paragraph but these days, if it’s not flowing reasonably easily, I move on to a part that I’m eager to write, and come back to the tricky bit later.

I’ve also stopped thrusting great wads of manuscript into friends’ hands and pleading for feedback. It’s my book; I don’t have to drag my poor buddies through the process. My friend who’s a database analyst doesn’t make me sit in his office and watch him tapping his keyboard. Anyway, they’re unlikely to say, ‘Chapter 12 is appalling. Were you drunk when you wrote it?’ And when they’re kind and encouraging, there’s a tendency to think, ‘Of course you’re going to say that. You’re my friend!’

I prefer to go it alone these days, battering on until it’s as good as it can possibly be at that point, and it’s time for my editor’s input. Sure, things can get stressy, but I like to bear in mind a quote I read by Guy Garvey from Elbow, in a Guardian feature about how to find inspiration. He’s talking about songwriting but it’s still stayed with me. He says: ‘If it’s all getting too intense, remember it’s only a song.’

I think that’s brilliant. It sort of shrinks the project down to size, making it seem instantly less scary and intimidating. Suddenly, it seems doable. It feels like the difference between being given a vast stately home garden to knock into shape, or a little window box of chives.

He also says, ‘I learned that the hard way. When I was younger I played the part of the erratic, irascible drunk in order to have something to write about.’ Talking of which, the writing group I belong to are coming over tonight. There are seven of us, all great friends, and I can’t think of anyone I’d rather celebrate with. Better stick that wine in the fridge…

My next book is finished! Hello flowers! 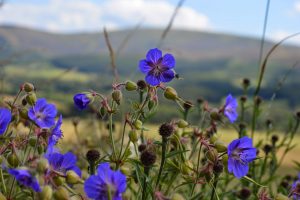 It’s a lovely feeling. I’ve actually emerged from my workroom and been out on big walks with the dog and drives in the country like old people do! Hence the pics of flowers. Jimmy unearthed a book called ‘The Wild Flowers of Britain and Europe’ which we’ve been taking on our jaunts. One of our sons asked, ‘Is it issued automatically when you turn 50?’ But I don’t care because I HAVE BEEN OUT OF THE HOUSE!

After months of grafting away, I can’t tell you what a relief this is. I used to find this part – sending a book to my editor, and waiting for her feedback – completely terrifying. I don’t anymore. Not because I think it’s perfect – every book comes bouncing back to me, requiring loads of fixes – but because it’s basically written which means the hard graft is done.

It’s also the first book I’ve managed to finish at home, with normal life going on around me, rather than hiding away in a hotel for a few days. There are several reasons for this. First, my kids have reached that age (boys 17, daughter 14) when they no longer want to converse with me. In fact, days – WEEKS – can go by and no one bothers me at all.  The older they get, the higher my daily word count. I’m hoping that, by the time my boys are 19, I’ll be dashing off 10,000 words a day.

Also, I realised how much I hate leaving my family to go away and work alone. It’s utterly miserable. Going away should involve much laughter and fun and chat and alcohol, but holing up in a hotel room to finish a book means no such pleasures are allowed. So you sit there, typing, feeling deprived of fun – and also horribly ungrateful because you’re in a hotel and should be enjoying yourself. Basically, much of it involves gazing mournfully out of a window which won’t open properly and wondering what everyone else is doing.

This time last year, I was in self-imposed exile in a Premier Inn in central Glasgow. Yes, I battered through the final chapters and got lots done. I wasn’t having to break off to throw a chicken in the oven or wash anyone’s pants. But I have never been so bloody lonely in all my born days. Only a friend dropping by to take me out for sushi – and sneaking out to Frasers to buy a ruinously expensive BB cream – saved me from tipping over into insanity.

I vowed to never put myself through that again. In fact I work better these days amidst the muddle of music and TV and people shouting and life going on about me – in other words, all the usual hubbub of home.  I also enjoy writing on trains and in coffee shops. But more than anything, after months and months of battering away at the keyboard there’s nothing nicer than not writing at all. To be idle of finger, and devoid of plot-related thoughts – to stop working and admire the flowers. By the way, ‘The Wild Flowers of Britain and Europe’ is an excellent reference guide, if you ever find yourself with time on your hands. 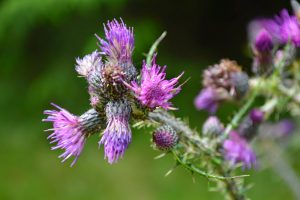